We regret to report that due to an increase in COVID-19 cases in Central Ohio, the Franklin County and Columbus Departments of Public Health have advised all residents of Columbus and Franklin County to stay home beginning at 6 PM Friday Nov. 20. As part of the order, county residents are advised to only leave home to go to work or school, or for essential needs such as seeking medical care, going to the grocery store or pharmacy, and picking up food.

This means that as much as we would like to host our dharma family at our construction site this weekend, it is the wisest course of action for us to follow the advice of our public health leaders and stay at home to protect our family and community health and prevent the spread of COVID-19.

Rest assured that when the emergency orders are lifted, we will joyfully gather to place our signatures on other building materials that will go into our new meditation center.

Meanwhile, please join us on Zoom on Tuesday Nov. 24 at 7 PM for our weekly compassion chant, as we pray the Chenrezig and Amitabha sadhanas for the protection and blessing of all beings.

Please take care during these difficult days and stay home when you can. Remember to wear a mask when you’re out and about, and remember to wash your hands. We love you and treasure you and look forward to seeing you in the coming months.

May all be auspicious and may all beings benefit!

Tibetan New Year 2016 began with a flurry of snow – streets in Columbus were clogged with commuters, and on the stage in the auditorium at the McConnell Arts Center in Worthington, 15 people made elaborate offerings of fruit, flowers, and lights to usher in New Year.Sitting on cushions large and small, with makeshift tables covered in brocade, they chanted the Praises of Tara to remove obstacles for all beings. Volunteers served tea and sweet rice in a nod to the Tibetan culture; a few came in to meditate silently before the workday.

KTC is a community of nomads, putting up its shrine table covered in white and maroon in various rooms at our temporary home at the MAC. While people of all ages flock to the MAC to learn about art, the KTC is chanting and meditating; we’re so grateful to have a place for our cushions and our hearts in this time of transition.

Meanwhile, KTC board members are tying up loose ends with the demolition company that is razing the old KTC to the ground. Most of the work was completed Saturday, with the next big steps coming this week: scooping up and carrying away the remains of the building and filling the empty spaces with fresh dirt. Returning the earth to its natural state is required under the demolition order, but it also feels right – like wiping a slate clean before starting afresh.

We will get a hand in bringing closure to the property this Saturday, when Lama Wangdu conducts a tea and smoke offering for the local deities and spirits. Tibetans understand the importance of paying one’s respects and offering gratitude to the beings who inhabit the land; we’ll offer that gratitude at the KTC Grubb Street property at about 2:30 p.m. Saturday with a special prayer service.

There will be charcoal and a bit of juniper offered in a brazier in the parking lot; feel free to stop by and pay your respects to the land, and offer it your thanks. The prayers will last about a half-hour, so be certain to dress warmly, in case there is cold and wind.

The search continues for semi-permanent space for the KTC’s Tuesday and Sunday programs; board members have spent a bit time in recent days making calls and visiting churches and other places to see if they can meet our needs. Lists of KTC possessions – our shrine objects, library books, bookstore items, audio equipment, and more – are being compiled by volunteers for the insurance adjuster.

This week our dear friend Lama Tom Broadwater, resident lama of the Athens KTC, goes to India to see His Holiness Karmapa and attend the 33rd Annual Kagyu Monlam. Our prayers to with him – and with our spiritual guide Khenpo Karthar Rinpoche, who will be leading a delegation of lamas from our “home” center, Karma Triyana Dharmachakra. Prayers for the KTC will be top of mind for the group, and we appreciate the goodness being sent our way!

Research continues on our three options – rebuilding on the current site, selling the property and buying another, or selling the property and building elsewhere. The board will start gathering “specifications” for our new KTC space early next week from members and friends; the information-gathering will take several weeks but will lead to the next stage of considering all of our options.

While we prayerfully wait for the next steps in our “journey home” to become more clear, we’re moved to gratitude by all of the donors and friends, old and new, who have stepped forward to help us. We are grateful for you, and offer your merit for the benefit of all sentient beings! 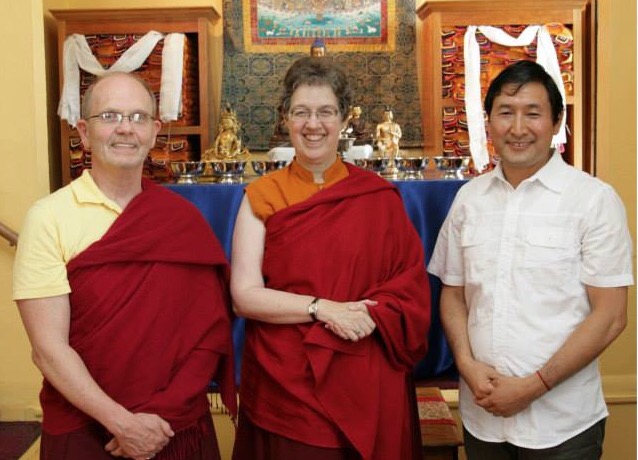 7 a.m. comes early every Sunday for the Columbus KTC – it’s when the Tara puja happens every Sunday. This weekend, the puja crew reported for duty at our temporary location – the McConnell Arts Center in Worthington.

Eight dharma friends helped Umdzes Marilyn Stephen and Erin Hess get ready for the weekly puja in a new location – the digital art classroom at the MAC. Images placed, offering bowls filled, and chants begun – an auspicious beginning for our nomads’ journey.With the old KTC building torn down yesterday (in answer to the city’s emergency demolition order) and the future a bit uncertain, it certainly felt good to be welcomed by Erin Blue and the rest of the wonderful staff at the MAC. We brought the entire KTC Sunday schedule to the arts building, with pujas, Meditation Instruction and Dharma Instruction classes, 10 a.m. Meditation, Lama interviews, a dharma talk and a special Mahakala protector puja for the pre-Losar (Tibetan New Year) blessings. It was a busy place – full of dharma.

And old friends. One after another, they came through the door, cushions in hand and ready to sit for the benefit of beings. They filled our “main shrine room” in the beautiful main gallery – and by Dharma Talk time, we counted nearly 100 people. Old friends. New Friends. Shambhala friends. The KTC Children’s Class. We felt surrounded by love and support from so many people – so many it’s hard to gather all the names together to say “thank you,” so we will just leave it as “we love you.”

Even students and new people found us – including one visitor who came all the way from Marietta, who felt confounded when her GPS led her to a vacant lot on Grubb Street. Signs at the site re-directed her to the MAC, where she attended classes and become a part of the community.

So many people volunteered to help visitors find the classes and classrooms. Others brought treats. One friend – Tom Olson of Cleveland – even brought us a microphone and amplifier.

During the dharma talk, Lama Kathy offered condolences to the community for the loss of the building, and invited everyone to take an imaginary walk through the mandala of KTC – its hallways, its shrine room, the library – and then imagine it dissolving into light and merging into their hearts. In this way, the mandala of KTC – that treasure-house of dharma – could become one with us, always to remain.

Before the Pre-Losar Mahakala puja, Lama Wangdu spoke eloquently of his feelings of warmth and joy at being part of the Columbus KTC sangha. He said obstacles arise wherever there is powerful dharma, and said that external obstacles, while painful, can be overcome by dharma and the goodness of virtue.

He also said he would like to have a puja of offering and thanksgiving at the site of the old Columbus KTC; when we have the time and date for the puja, we will let you know.

Also, we heard from Lama Tom of the Athens KTC – the Athens KTC has gifted us with a wonderful portrait of His Holiness for our center, as well as prayer books for us to use while new ones are being prepared. They also took up a collection from their membership and gave us $400. Thank you to Lama Tom and our dharma siblings in Athens!

Other KTCs and centers also have made donations in recent days, including Ann Arbor KTC, Albany KTC, Cape Ann Vajra Vidya, Jacksonville KTC, Gainesville KTC. We also received a donation from Lama Karma Drodhul. Many thanks to all!

This week will continue the work of seeking longer-term housing for our community and meetings with city officials, realtors and others to see what options we have for replacing our building. We’ll also update Mayor Ginther on our progress, and meet with The Columbus Foundation, which has started a fund for our renovation there.

But prayers at the MAC will continue, with our annual Losar Tibetan New Year prayers and observances beginning aat 7 a.m.Tuesday at the MAC, 777 Evening Street, Columbus 43085. Morning prayers will go from 7 until 9:30. and an evening practice will go from 5:30 to 8:15 p.m. We hope you can join us, and make an auspicious start to the New Year.

Thanks to Erin Blue for the photos! 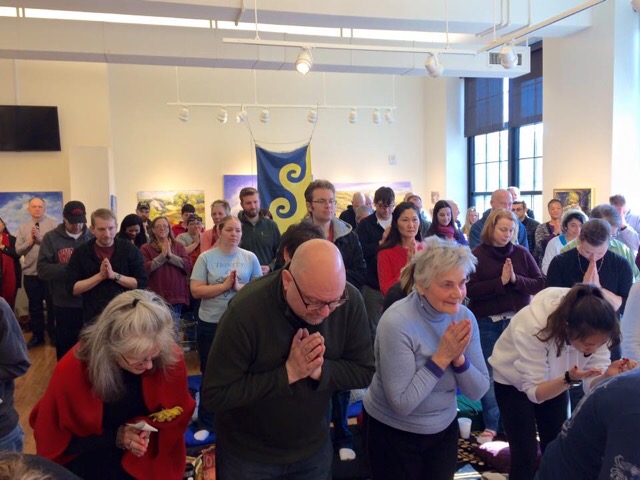 We are happy to announce that we will be offering our regularly scheduled services this Sunday and Losar Tuesday.

For the next two Sundays (2/7 & 2/14) and for Losar this coming Tuesday (2/9), Columbus KTC will be offering its full schedule at the McConnell Arts Center in Worthington located at 777 Evening Street (Corner of 161 & Evening Street), Worthington, OH 43085.

Below are the schedules for this Sunday and next Tuesday. Specific classroom locations will be posted on entry doors Sunday morning and greeters will be present to help guide you.

The shrine room will have plenty of chair seating available. Bring your cushions and puja tables if you would like. The MAC has hardwood floors, and all classrooms will have tables and chairs as well.

A COTA option is the #2 bus which runs down High Street. The MAC is two large blocks west of High St on 161 (Dublin-Granville Rd).

A group of CKTC members created a rideshare group on Facebook, please click here for more information (or search CKTC Rideshares (Unofficial) on Facebook). This is not run or maintained by Columbus KTC, but rather is made up of regular attendees who want to coordinate rides.

We look forward to being together with everyone this Sunday. Thank you.

May All Beings Benefit.