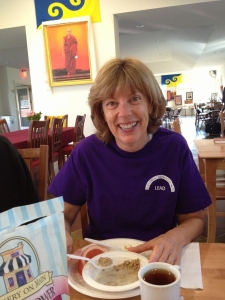 After more than a decade of service to the sangha of Columbus Karma Thegsum Chöling – the last seven years consecutively – Kim Miracle has completed her volunteer board service and will retire from the KTC administrative Board.

Her retirement, which begins Nov. 1, comes after completing the seven-year task of raising $3.2 million to rebuild the KTC meditation center after it was destroyed by an arson fire in January 2016.

Kim had previously served as KTC director in the 2010s, presiding over a volunteer development effort and overseeing visits by many visiting teachers.

After becoming center director seven years ago, Kim was helping the center organize needed repairs to its old 1924-vintage wooden church building when an arsonist struck, setting fires in trash bins in the KTC’s alley. One of those fires set the KTC building ablaze, with Kim being notified early in the morning of Sunday Jan. 31 that firefighters were trying to battle the fire.

While the building burned in the background, Kim was on the phone with Lama Karma Drodhul, Khenpo Karthar Rinpoche’s nephew, telling them about the fire, and receiving the Rinpoche’s immediate advice – “don’t be sad – rebuild it.”

Kim was instrumental in building a coalition of experts who advised KTC on everything from tearing down our old building, to finding temporary housing, and beginning the work of designing a new building.

Over the next seven years, Kim, along with KTC’s lamas, Board members, and volunteers, invested thousands of hours of volunteer work to shepherd the project through government approvals, architect and contractor hiring, and overseeing construction work. Through their efforts, the new KTC building was opened in March of this year.

But even after the completion of this major project, there was more work to be done. In the last few months, Kim helped organize a sangha pledge drive, volunteer work parties, and meetings to help KTC set its strategic goals and create a vision statement for the future. Her contribution to KTC and its projects has been immeasurable!

The Columbus KTC Store is Open!