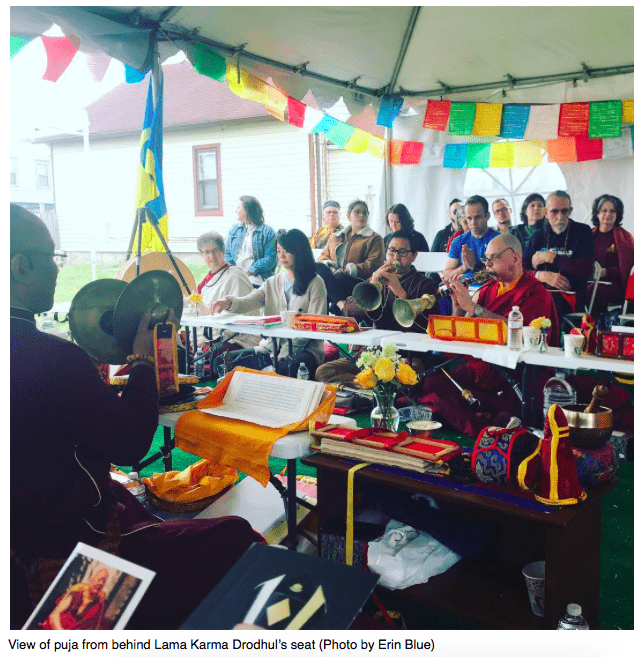 Beginning the Next Chapter:  An Attitude of Gratitude

Words cannot express the gratitude and love we are feeling at this moment for all of our Columbus Karma Thegsum Chöling family.  The Land Blessing and Groundbreaking on Sunday April 7, 2019 is a day we will remember for a long time. More than 100 of our dharma family and friends gathered under a tent and out on our lawn, to invite Buddhas and Bodhisattvas and wisdom beings from every quarter of space and ask them to dwell upon and bless our land for the benefit of beings.

Led by Khenpo Karma Tenkyong and Lama Karma Drodhul, a group of lamas and dharma family from our home monastery, Karma Triyana Dharmachakra of Woodstock, NY showed us how to bless our land with dharma music, chanting, and a sacred fire.  Assisted by Lama Zopa from Albany KTC and Lama Sonam from the dharma group on Long Island, NY, we created a shrine, chanted a purification for the land, made offerings to local deities and spirits and recited a protector chant.

Like a mythical city that only appears for one day, our site sprouted a shrine tent before 8 a.m. Sunday morning.  After having started a few days before the event with a “mini” land blessing and offering prayer of their own, the site preparation team led by KTC volunteer James Maze (a recent arrival at the center and principal of a landscaping company) used rolling equipment to level the tent site, installed a tent with a floor under a carpet of astroturf, brought us portable restrooms and cordoned off our parking lot to make it safer to park and cross Sandusky Alley.

Transport Captains Bill Miracle and Chuck Drake arrived with their truck and van at 8 a.m., unloading a treasure-trove of materials that could only be called “Instant shrine room.”

Sitting cushions gathered from several places, folding puja tables, a cafeteria-size table and a stair-stepped shrine borrowed from Don Fortner’s home quickly were installed and decorated by brocades and thangkas brought from the car trunks of Shrine Master Julane Goodrich and her team.

Julane and her team (of Roberta Riley, Chökyi Gyamtso, Marilyn Stephen, Bill Miracle and Sara Rampersaud) arrived at 8, along with Cathy Lhamo Jackson and the Offering Tormas – more than 40 small dough-and-butter sculptures made days in advance and meant to be offered to the land as a blessing. More than a dozen flower vases of all sizes came with Marilyn, who had selected flowers of the five primary colors – white, red, blue, yellow and green – to symbolize the five wisdoms and the five Buddha families.

Lama Karma and the chant team arrived soon after, and the site was abuzz with activity, as a shrine was assembled and dressed with brocade and offering bowls, and an area for chanters was created in the center of the “instant” shrine room.

James Wittenmyer donned a reflective vest and started guiding registered guests to parking places with assistance from Chantal Sapp and Helder De Andrade. Meanwhile, Chuck Drake (a Scoutmaster and KTC assistant director) called the Columbus Division of Fire to let them know we had an open burn permit and were about to light a little bonfire in a steel fire bowl at one edge of our property.

A steady stream of guests arrived throughout the next hour, and were seated by Welcoming team lead Connie Jenkins, assisted by David Weaver – and by Sara, taking a break from shrine duties to assist.

Just a little after 9 a.m., Lama Karma Drodhul, acting as chant master, instructed Director Kim Miracle and me to cast the first fragrant juniper fronds into the fire, and our puja began.

The next hours were a whirl of sights, sounds and colors. Prayer books assembled over the previous week by a team of KTC “dharma elves” were opened, prayers were read, drums were played, Tibetan gyaling horns blew, and our land was home to the Buddhas and Bodhisattvas once again.

On the east lawn, the fire consumed several pounds of offering substances: mixed flour, spices, tea, herbal medicines, the “three whites” (yogurt, milk and butter) and the “three sweets” (honey, sugar and molasses), bits of brocade and gem powder made sweet smoke that drifted through our neighborhood, carrying blessings. Every few minutes, a pair of KTC sangha members were dispatched from the shrine tent, carrying an offering of tea in a copper chalice and a plate of tormas and “sang offering” (smoke offering) substance.

Don Fortner provided sound with KTC’s brand-new battery-powered portable PA system. He worked with Joseph Francik and Anne McCain on capturing video from the day, and he and Tanya Schroeder snapped photographs of the event for posterity. Jaimee Patton came to help with cleanup, but ended up filling in just about anywhere she was needed.

Friends came from all over. Amy Wells, a meditation teacher at KTC in the 1990s has since relocated to North Carolina for an active life among the mountains and trees. But when she heard we were celebrating the place she met the dharma, she couldn’t stay away. Her smiles and hugs brought us joy.

Meanwhile, over at Congregation Tifereth Israel, 1354 E. Broad Street, KTC volunteer John Bova directed a team of helpers who welcomed members of the public to our “regular” weekly meditation and classes while the Land Blessing was going on.

Before the lunch break over at the KTC site, Lama Karma gave KTC friends a message of encouragement from founder, Khenpo Karthar Rinpoche, who congratulated us on the work that had brought us to this stage in our development and expressed good wishes on the next phase of the work. After sharing these remarks, the Khenpo and Lamas led the group, now numbering about 60, toward the northeast corner of the property, where the groundbreaking was to take place.

Our architects Peter Macrae and Peter Lenz and builder Bill Jones were joined by Nannette Maciejunes, director of the Columbus Museum of Art and an honorary fundraising co-chair at the site of the groundbreaking on the northeast lawn, where three special shovels tied with white, red and blue Tibetan offering scarves symbolized the Buddha’s body, speech and mind, touched our land with future blessing.  Peter, Pete, Bill and Nannette, along with center leaders, and even the children in attendance, got to dig the first spades of earth on the new project. Erin Blue, our “special guest” concierge, assisted (along with Khenpo Tenkyong) in facilitating the groundbreaking event.

During the lunch break, Jaimee Patton helped with cleanup while others chatted and chowed down on sack lunches or the snacks provided by Michael Stone.

After a quick lunch at the Idea Foundry hosted by volunteers Kevin Dwinnell, Kirsten Carroll and Kim Miracle, the chanting group returned to the tent for a rousing chant to the Kagyu protector Mahakala, asking for his protection for our center and its sangha members.

Visiting Shrine Master Lama Sonam from Long Island, was assisted by local KTC folks as she prepared and made offerings to the protector Mahakala, followed by a smoke offering for spirits in the Bardo and a Chenrezig mantra chant.

Then, in a flash, it was over. The ground purified and blessed, it was time for our “illusory city of dharma” to be dissolved. The sun, which had been darting in and out of clouds all day, disappeared and rain clouds began to gather. Bill and Chuck parked their vehicles nearby, and the reverse stream of materials headed back to the trucks. Keith Mondal was on trash collection and tidying, and everyone pitched in to collect chairs and tables and load everything up again.

While disassembling the shrine, Marilyn pulled beautiful flowers from their vases and handed the blossoms to volunteers and departing guests. “Let’s leave these on the land as an offering and blessing,” she said, tossing carnations and roses. Small heaps of flowers dotted the landscape, beautifying every spot where they fell.

Rain, which had been a threat most of the day, did not fall until a couple of hours after the pujas ended at 3 p.m., about an hour after the tent crew arrived to take down the temporary shrine hall.

It is impossible to quantify the blessings of the day, but site preparer James Maze wrote us a short meditation on it by text message right before rain began to fall.

“I have visited the land at 231 S. Grubb Street several times over the last week. As I walk across this small piece of land today the energy feels different. Although I do not understand this energy, its feels good and bright. Something powerful happened here today … Good job and thank you.”

Thanks, and Still More Thanks …

A lot goes into a Land Blessing ceremony; substances and offering plates were ordered from other states, special tiny 5-color flags were made (by Sue Ellen Steinmetz) to offer on our Sang plates to collect positive energies from the universe; Lama Kathy worked with officials at the Columbus Division of Fire and the Ohio Environmental Protection Agency to get proper Open Burning permits for a fire puja (who knew fire pujas in the city limits were regulated – but they are); Treasurer Steve Phallen interviewed tent purveyors and helped work out our chair and shrine layout; and Bill Miracle helped assemble the steel fire bowl used for the fire puja.

There is no way to adequately thank everyone for their work, and any list will certainly leave out the many who lent a hand to put together our Land Blessing event. If you can think of folks who participated who you don’t see mentioned here, please let us know by writing to Lama Kathy at lamakathy@columbusktc.org.