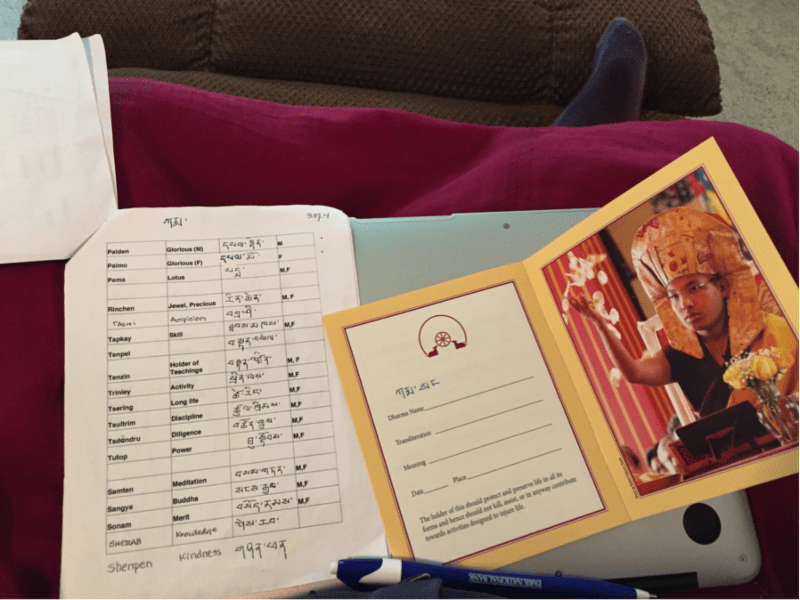 Seeing It Makes You Smile: Setting Folks on the Dharma Path

It’s one of the most enjoyable parts of my job: sitting in my easy chair, light coming through the front window, writing in ballpoint pen on little booklets the names for an upcoming Refuge Vow Ceremony.

The curls and squiggles of Tibetan script still challenge me; I’m sure I write with the same American accent I use when I try to say a few words of my adopted liturgical language. There’s a secret fear in the bottom of my stomach, that a Tibetan lama someday will see my scribbling and “tsk” and chuckle quietly to herself about my atrocious penmanship.

Folks ask how I choose Refuge Names – those combinations of words, preceded by the name “Karma” to indicate the recipients as part of the spiritual family of Karmapa – that are given out near the conclusion of a Refuge Vow-Taking Ceremony.

Great lamas can size up the spiritual qualities of disciples and name them perfectly on the spot; folks like me rely on the beauty of synchronicity, choosing names from a list and letting karma guide my hand in choosing the name as the candidate approaches my seat.

The ceremony of taking the Refuge Vow is 2,500 years old, and the lineage of the vow is unbroken since that time. Since the historical Buddha Shakyamuni began accepting those who wish to “take refuge” from the sufferings of samsara by placing their reliance on the Buddha as teacher, the dharma as path and the sangha as community, the vow has been handed down, generation after generation – across the lines of country, nation, gender, species, time and space.

Each generation has held the vow close to their hearts and then passed it along, in a living lineage that carries with it the same power and blessing as it did when the first Founder of our faith, the Buddha, gave it to his disciples.

So when we receive the Vow of Refuge, we receive a core of inner strength, a core of remembrance of our powerful, hidden, beginningless and endless Buddha nature, that can reassure us in difficult times and propel us down the path toward letting go of the causes of suffering and embracing the causes of happiness.

At the end of the road – the fulfillment of the goal set by the vow – is the complete liberation from suffering called Buddhahood, enlightenment, or awakening. The vow is the entry to that path, a beginning without an end, a mystery of intention that crosses lifetimes and leads us to benefit others endlessly.

All of that is contained in these little names, these “Tenzins” and “Sangyes” and “Lhamos” (“Holders of the Teachings,” “Awakened One,” and “Goddess”) and dozens more like them. The names are a shorthand for what has always been within us, the Buddha Nature, the mind that has the potential to see its own inner nature and awaken to perfect wisdom and joy.

And the hope is that those receiving those names will take the inspiration held within them and ride it like a breath of fresh wind, moving ever closer to ultimate peace.

So, even though I chuckle to myself sometimes, and fear that I’m jumbling the names rather than making them clear, I know that at some level they will take hold of the people who receive them, and those names will travel with them into the future – when they will use them to the ultimate benefit of all. 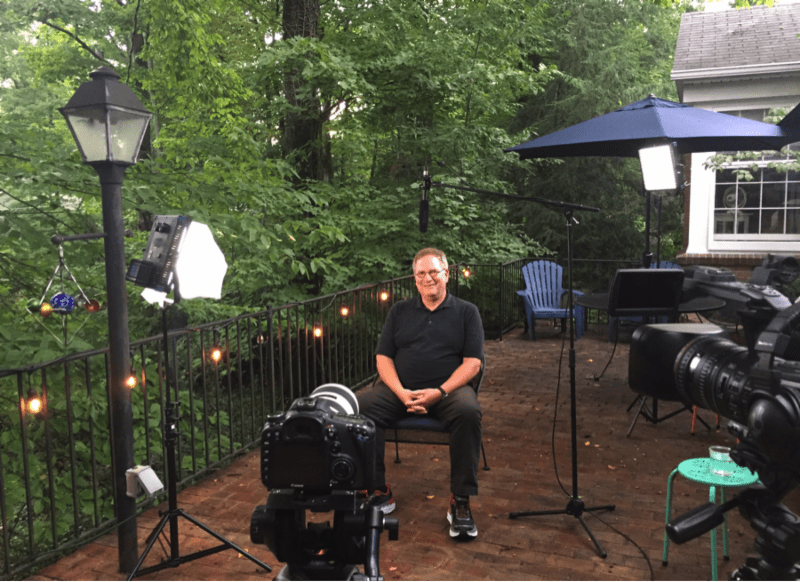 This week’s episode of The Journey Home: Columbus KTC Rebuilds Its Temple, involves lights, cameras, and action at the home of KTC Member at Large, Eric Weinberg.

In the coming months, Eric and the other members of our hard-working Columbus KTC Board – Director Kim Miracle, Assistant Director Michelle Evans, Treasurer Steve Phallen, Secretary Justin Fitch – will be unveiling a new Rebuilding Campaign goal and the latest copies of the plans for our new building.

Those drawings you see on display in the basement of Congregation Tifereth Israel are the “first drafts” of our new temple; Columbus-based architects Peter Lenz and Pete Macrae are working on “KTC Rebuilding 2.0” and will have something for us to see in a couple of months.

Until then, it’s all fundraising, all the time. Our first online auction netted $13,000 in donations, and recently, we had fundraisers with martial arts luminary Stephen K. Hayes and a booth at the 10th Annual Independents’ Day arts festival on Washington Boulevard in Franklinton.

Along with that, we’re working on a short film (just a few minutes long) that will introduce the project to a wider general audience. And for that, you need someone with a camera, lights, and experience.

As luck would have it, Ryan Sweeney, Eric Weinberg’s neighbor, has all of these, and this past week a group of us met to be interviewed on camera for the film.

You won’t see the results until late October, but we’re confident that it will help you and your friends learn more about KTC and what we do to make Columbus a great and mindful place.

May all beings benefit!