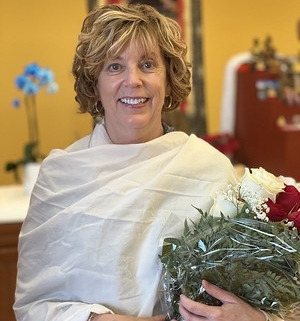 After more than 20 years’ service as a KTC Board member – the last 8 years as director – Kim Miracle celebrated her retirement from KTC Board service this past Sunday.
In a short presentation after the Sunday Dharma Talk on “Pilgrimage” by Cathy Lhamo Jackson, Lama Kathy, Lama Tom, and Acting Director Chuck Drake made presentations of flowers and gifts to Kim to mark the milestone. After a round of applause from those in the shrine room, Kim thanked all the past and present Board members for their service to KTC, and described the process of rebuilding the KTC as a group effort guided and inspired by our late founder, Ven. Khenpo Karthar Rinpoche.
Kim remarked that she and other KTC volunteers learned how to build a new center step by step, learning along the way. “Lama Karma, who was president of KTD at the time, said we needed to write a book about how to build a dharma center,” Kim said, “and we told him that one of the chapters could be titled, “What to Do When You Don’t Know What to Do.’”
At the end of her remarks, Kim invited those in the audience to consider volunteering for KTC themselves, to help support what she and other volunteers have built.  There is great merit in volunteering to help the dharma center, she said, and great benefit for sentient beings.
Thank you for your service, Kim!
https://columbusktc.org/wp-content/uploads/2022/11/52481792562_3ec74d945d_w.jpg 400 300 Quinn Griffin https://columbusktc.org/wp-content/uploads/2022/09/KTCLogo-4.png Quinn Griffin2022-11-07 19:47:432022-11-07 19:55:44Thank you, Kim! Gifts and Reception Celebrate a Milestone