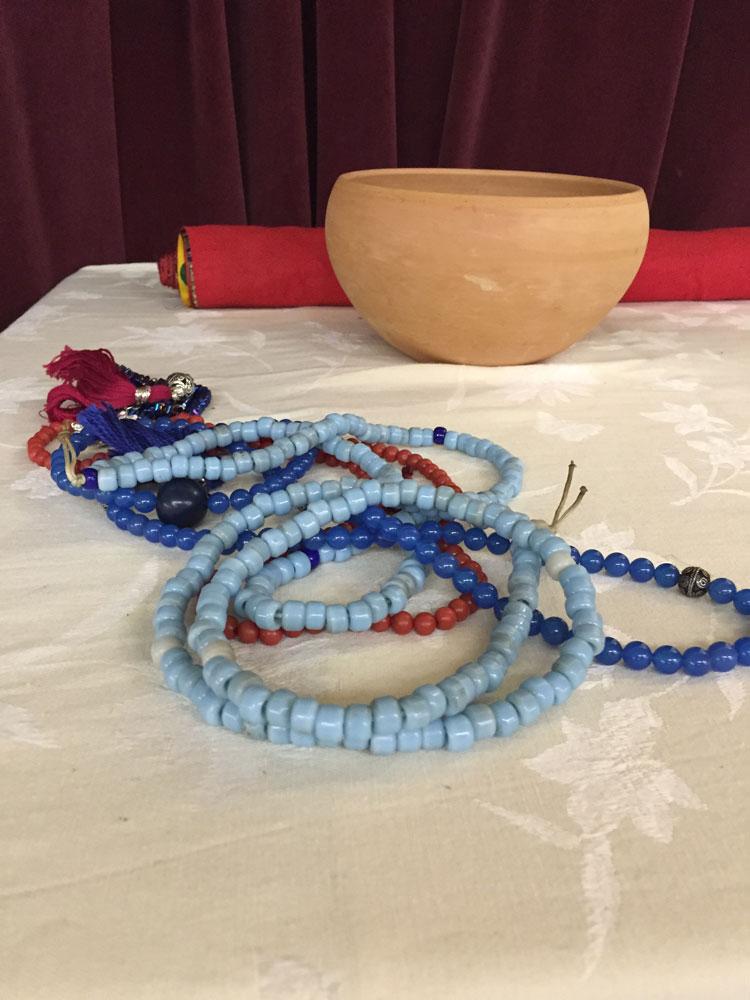 There’s a pile of malas – Buddhist prayers beads – on the Shrine at KTC’s temporary home at Tifeteth Israel.

When people come to the KTC for chanting practices such as our Tuesday night Chenrezig compassion meditation, they sometimes have forgotten their malas – or, if they are new to practice, they don’t have malas at all.

The pile of malas are for loaning – visitors borrow them, say mantras with them, and then put them back on the shrine for the next person.

The two light blue malas in this pile – made of simple glass/china beads, knotted on thick cord – are welcome “survivors” of our January temple fire. They are heirlooms of our past, and tell an important story about our future.

The blue glass bead malas were made by Herb Walum, a retired mathematics professor from The Ohio State University, who first started coming to KTC around 1980. He was keenly interested in Buddhism and meditation, but his main love was Chenrezig practice and mantra. OM MANI PEME HUNG – the mantra of Chenrezig – was his favorite practice, and he visited KTC weekly to chant with us.

Eventually, he took up the practice of Tong-len Compassion Meditation and the Mahamudra Ngondro (which he finished after several years). But he never lost his affection for Chenrezig practice, and made the malas as “loaners” for people who came to puja without a mala. He made and gave away many more of these; they were a trademark of sorts for his enthusiasm for the mantra.

Herb later retired from teaching and sold his house on Milton in the north end of Columbus, riding his motorcycle West to his home state of Washington, where he built a small retirement home as a base of operations for his retirement “project” – completing as many million recitations of OM MANI PEME HUNG as he could.

Herb passed away several years ago, but his malas are a gift that goes on giving at KTC, and serve as a reminder for our welcoming spirit.

Welcoming new people – and teaching them Meditation and Introduction to Buddhism classes for free – is part of what makes Columbus KTC unique. We remember what it’s like to be new to dharma – to come into an unfamiliar place and feel a bit anxious about how we will “fit in” – and we want people to feel comfortable and welcome in our home.

We keep these programs going every week, rain or shine, whether there’s one student or 30 students – to show the heart of dharma is about generosity, patience, and compassion. Our philosophy is that there is no such thing as a silly question, and all inquiry helps lead us closer to the truth.

Providing this safe place for inquiry and meditation is what we do; it’s who we are. Even as nomads, in the shelter of Tifereth Israel, we provide this service.

In essence, our intro classrooms and our classes and even Herb’s malas are all a welcome for people who are not yet here – a continuous light on the shoreline for navigation in troubled waters.

We’ve just finished staffing our booth at the Community Festival in Goodale Park this past weekend. For more than 20 years we’ve handed out incense and sold prayer flags at the festival, telling people about our programs and inviting them to join us. We always see an uptick in new people coming to KTC in the weeks after Comfest – they will be trickling in by the ones, twos, and threes over the next few weeks, bringing fresh enthusiasm to our classes and fresh energy to our meditations.

If you see a new person in the next week, think of your first visit to KTC and reach out a hand, or say “hello.” Herb will be smiling, and so will all the Buddhas and Bodhisattvas, as their “family” grows.

The Journey Home: This Week’s Highlights

KTD to Lend a Hand

The weekend before last, KTC Director Kim, Secretary Justin and Lama Kathy traveled to our “home” monastery at Karma Triyana Dharmachakra in Woodstock NY to meet with Khenpo Karthar Rinpoche and President Khenpo Karma Tenkyong to offer an update on KTC rebuilding plans and hear suggestions from KTD for fundraising activities.

The crew received blessings from Rinpoche, and ideas from Khenpo Tenkyong as well as KTD volunteer Jeanette DeFries and Trustee Sandy Hu.

We’ll share more of the ideas in the coming weeks, but the short summary is that KTD plans to help KTC with fundraising at the national level in the next few months. Watch this column for more ideas from our “home” monastery!

KTC’s research into whether a new, larger building could be constructed on the Grubb Street property entered a new phase last week, when KTC submitted its first design drawings to the East Franklinton Review Board.

The EFRB meeting (on Tuesday June 21) was the first of three City of Columbus reviews needed to determine whether a larger shrine building can be constructed on the KTC property. The EFRB looks at designs and sees whether a building will fit into a neighborhood, as well as looking at general zoning requirements, such as firewall setbacks and property line setbacks, parking, etc.

Last week’s review (an introductory meeting called a “concept review” in city planner parlance) was led by our attorney Tom Hart and Keith Spruce, our architect. These two volunteers have offered to shepherd us through the process toward seeing if we could, indeed, build on our old property.

Last Tuesday’s meeting went smoothly, and there were no immediate objections from EFRB members to the KTC design. However, more review will be necessary before a final approval can be sought. Keep those Tashi prayers flowing for our “new home!”

A joyful reunion with KTC friends took place the evening of Tuesday June 21. About 50 people attended in the Lower Social Hall of Congregation Tifereth Israel on East Broad Street.

After welcoming and and introduction from KTC Director Kim Miracle, meeting facilitator Jeanne Weinberg led a circle process that allowed for small group discussion on how sangha members are feeling in the wake of the fire, and what they need from their KTC. After small groups reported in, Director Kim described the work being done by the KTC Board to research the three options for a new KTC Home: buying an existing building and remodeling it, building on the current Grubb Street lot, or building on a new lot.

After reviewing the difficulty the Board has had finding suitable properties in our price range, Director Kim reviewed the plans drawn for a new-build option by Milwaukee Architect Keith Spruce. The plans are for a two-level building oriented toward Rich Street and featuring an upper level shrine room seating 120 people as well as lower-level classrooms and a community room.

At the conclusion of the meeting, a show of hands by participants indicated approval of pursuing the new-build option. Plans now will be refined and reviewed with various City of Columbus boards (see above).

The circle-process meeting, a first for KTC, was warmly received, and many say they look forward to use of this format in the future. Many thanks are in order for Jeanne Weinberg’s expert assistance, as well as the tireless work being done by the KTC Board to facilitate our sangha’s journey to a new home. May their merit grow and flourish for the benefit of all beings!

Comfest is almost here! Some last-minute reminders and announcements