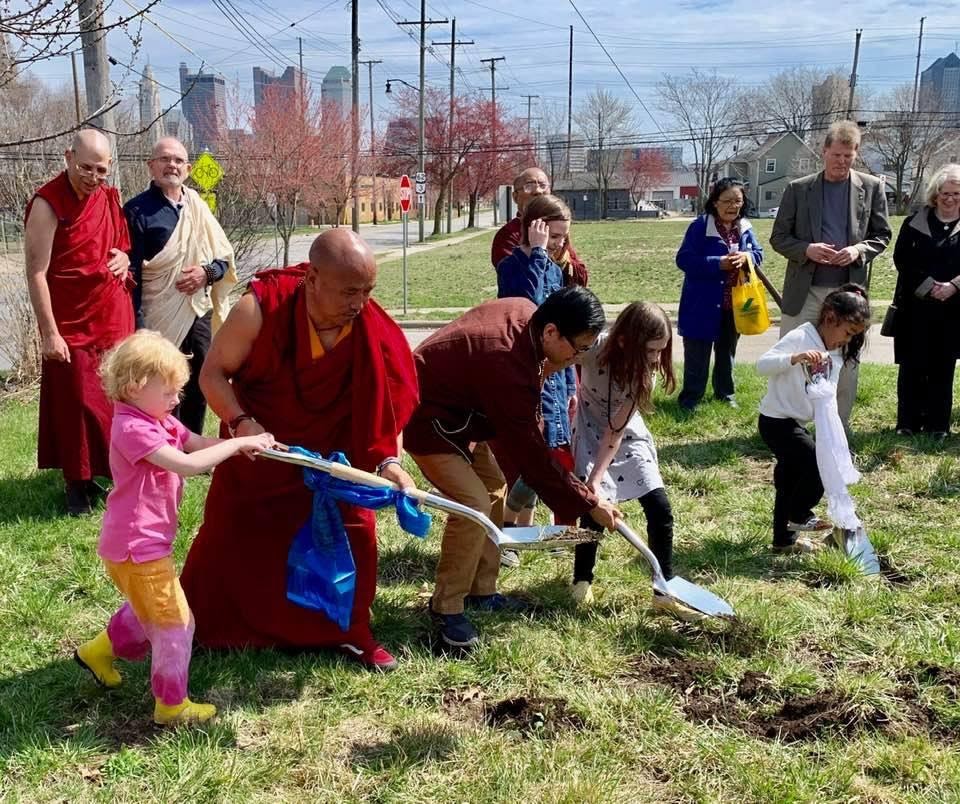 Rebuilding a dharma center suddenly destroyed by fire is a trial – by fire, as it were.

Learning how to tear down a damaged building, negotiate with insurers, find new meeting space and salvage what can be saved from a burned building are a crash course in coping with the First, Second and Third Noble Truths (suffering, its cause and solution) and their younger philosophical sibling, Impermanence.  Leaning into the loss of 40 years’ worth of history and seeing the complexities of clinging in all its forms urged us (individually and as a group) to let go into an unknown future guided by our teachers and our own inwardly glowing Buddha natures.

The next phase, of planning, designing, funding and actually rebuilding a new temple is a course in the Fourth Noble Truth – the path that leads us out of suffering.  Bit by bit, meeting by meeting, donor by donor, we amassed a group consensus on the structure and hired experts to help us design it and fundraise for it. Now we are poised at the threshold of the next step – starting the construction.

The beautiful and inspiring Land Blessing Ceremony on April 7, attended by more than 100 sangha friends and lamas from our “home” monastery in Woodstock, NY, was an important pivot point.  The site of tragedy and destruction, which had turned into sad and haunted vacant lot suddenly turned into a vibrant Buddhist practice space filled with chants and prayers for all sentient beings. Blessing the ground and then digging into it with ceremonial shovels, we could glimpse a sacred future.

Last week, the planning began in earnest as a group of us sat with Architect Pete Macrae and builder Bill Jones to review the first set of working drawings for the new KTC. We also welcomed into our team Jaime Oberschlake, an experienced architect who will serve as our owner representative – the eyes and ears of the KTC Board who will monitor the project for us through the construction phase and make sure the building meets KTC’s needs and will be a home for us for the next 100 years.

During the meeting several changes were identified (restroom design IS important, right?) and will be implemented in the drawings before the project is put out for bid. In addition, Khenpo Karthar Rinpoche, our beloved founder (and legendary shrine designer) also sent some comments and changes for the main shrine hall.

The next step is for Pete’s team to produce the final working drawings which should be done soon.  Pete will send these to the East Franklinton Review Board (which approved our external design on behalf of the City of Columbus) for their agreement and stamping.

More meetings for the KTC Board and design and building team are in store. In fact, I recently told Board members Kim, Chuck, Steve, Michael and Eric that they will have completed the “virtue equivalent” of a long retreat through their dedicated attendance at all these meetings!

There will still be some tense moments as we tally up the financial effects of the changes on the final construction budget. Some things have been added, some removed, so we are sending out prayers that the budget will balance in our favor.

Also, because of all this careful planning, our construction start date may be delayed until later in the summer, but the entire team agrees that having the best and most accurate construction drawings at the start will save us time and money during the actual building phase, which is expected to take 10 months or so.

And, after interviewing four candidates this past month and choosing Jaime as our owner representative, we believe we will have an experienced person in our corner helping us understand the drawings and the construction process. While there is a cost associated with hiring Jaime, it is hoped he will “earn” his costs by saving us time and money in the long run.

We will keep everyone updated as the project progresses, as we will have another ceremony – to place treasure vases in the foundation – coming up in a while, and will ask your presence and prayers to help us.

Meanwhile, you can still contribute to us via PayPal.

And you can make a “contribution of prayer” us by reciting any prayer or mantra you wish and dedicating it to the rebuilding of KTC.  A good prayer to recite is the Tashi Prayer, or “Prayer of the Eight Noble Auspicious Ones” which is drawn from the sutras and recites the names of awakened beings as a way of accumulating auspicious circumstances:

May all beings benefit!