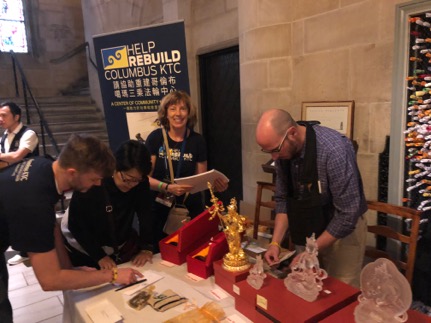 Standing in the lobby of the Riverside Church in New York City, we were surrounded by a wall of people several layers thick. They were interested in hearing about our KTC Rebuilding Project, and were impressed by the six-foot-tall poster we had next to our table – featuring a photo of the Columbus firefighter rescuing our Karmapa Namchen “Vision Banner” from the top of our burned building in January 2016.

We had been fundraising for a few hours over the last few of days at the famous church, where we had been invited by Khenpo Karma Tenkyong of KTD Moanstery to share our project with dharma friends attending His Holiness Karmapa’s program on “The 37 Practices of a Bodhisattva.”

Our opportunity to meet new dharma friends in New York City came just a few weeks after His Holiness had heard of our construction fundraising shortfall and had promised to pray for us to hasten the fundraising of the needed cash.

On this particular day, we had generated some interest with the Donor Gifts we had on display, as well as gold-covered copies of “The 37 Practices of a Bodhisattva” packed into little gift bags with polished sandalwood wrist malas. On small boxes sat clear glass statues of Vajrasattva that were to be blessed by His Holiness Karmapa the following day. It was a fountain of goodness in the center of a stone church lobby.

Then, all at once, out of the crowd emerged a statuesque Asian woman with striking features and a regal air. Dressed in flowing white dress and blouse, she approached our table with purpose, her elegant fingers grasping the books and malas, creating a pile of them in the center of our table. “I’ll take this, and this, and this,” she said, continuing her collection.

After a few astonishing minutes, we had bagged her gifts and she had made her donations, and we stared at each other in disbelief. The woman in white who had come from nowhere left us with nearly $5,000.

It didn’t take long for the symbolism of her visitation to sink in: His Holiness Karmapa had blessed us with a generosity dakini – right there in the middle of a church lobby.

The rest of our sojourn in the church was not as exciting, but no less wondrous; over those few days, thousands of dollars were donated to the KTC Rebuilding Project. We made new friends, and brought many others the inspiration of our new home.

Although we had been telling the story of KTC to people in Central Ohio for 2 ½ years, the folks we met in New York City had never heard our story before. They studied our posters and read our description of the fire and Khenpo Karthar Rinpoche’s vision for a new center, and were inspired to give a donation to see that vision carried through.

And we found ourselves being refreshed and re-inspired by their interest. It was as though the vision of a new KTC was a spiritual dynamo for both our new dharma friends, and for ourselves – the more interest put into it, the more inspiration came out of it. And on and on.

Working on a large project like ours, we may sometimes feel alone, but as we reflect on the words and gestures and donations of dharma friends far and wide, we know that we are not alone – because all of our dharma friends are with us.

And these friends are everywhere. Those “37 Practices” booklets? Sent to us by a dharma student in Taiwan. Those 100 sandalwood wrist malas? Created by a Tibetan man and his friends in California. Those glass Vajrasattva statues? Bought from the KTD Bookstore and personally filled (in his office, no less!) by KTD President Khenpo Karma Tenkyong. Those KTC posters? Created by a designers in Athens, Ohio and Dallas, Texas, and printed out by a print shop manager in Newark Ohio on a tight deadline in beautiful living color.

Add to that the work “on the ground” at Riverside Church by folks who took time off their daily lives to travel to New York City – KTC Director Kim, Assistant Director Stacey, Secretary Justin, as well as Lama Tom and Cathy Lhamo Jackson, Tanya Schroeder and others – and you have a formula for inspiration a thousand miles wide.

How do we take that nourishment? By dedicating and rejoicing. When we dedicate, the work we have done is sealed and preserved by goodness; when we rejoice, the virtue increases and expands.

We still have a way to go to re-create a new home for Columbus KTC, but meeting our fellow travelers – as so many of us will do in the coming months as we renew our community outreach and share our story with the world – will help us feel connected, and a part of this fountain and river of goodness in our little part of the world.

UPDATE: Over the next few days, Khenpo Karthar Rinpoche is conducting a fundraiser for Columbus KTC at our “home” monastery, Karma Triyana Dharmachakra, where ceremonies in honor of Khenpo Rinpoche’s 95th birthday are taking place this week. Dharma friend Amy Wu of San Francisco and none other than our own Cathy Lhamo Jackson are “working the table” this week to help raise money for the KTC!