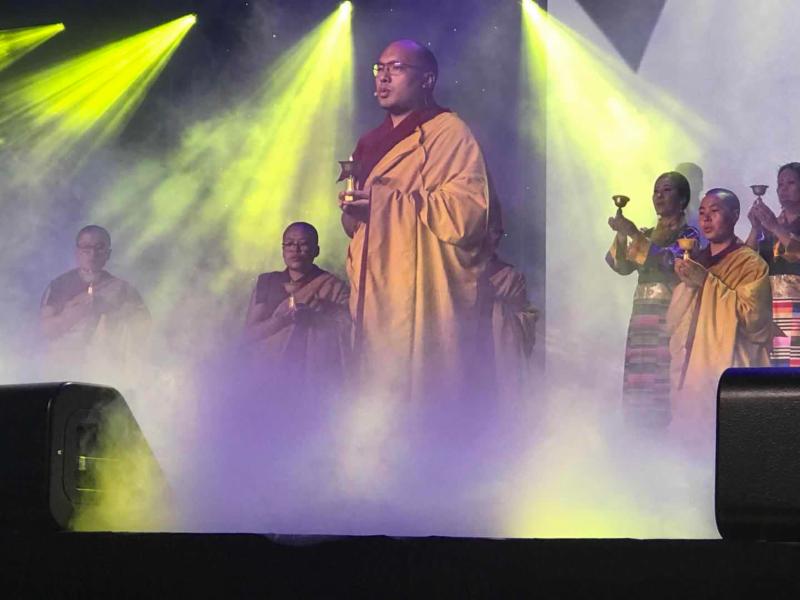 Sitting just inches away from the stage at the Hulu Theater at Madison Square Garden in New York City, I knew that something historic was about to occur. The stage, which had just hosted a collection of performers from Tibet, China and the western world, now was awash with golden light and a carpet of fog.

Into the center of the stage, near the edge of the performance space, stepped a tall Tibetan monk in Buddhist robes. He held a single golden-colored lamp chalice in his hands, right near his heart.

As the lights came up and shone upon his face, waves of applause came from the crowd of 5,000. His Holiness Karmapa, Ogyen Trinley Dorje, began to lead us all in a prayer:

“May a hundred million [lamps] appear before each and every Buddha …

“May its light dispel the darkness of ignorance …”

At that moment, focused on a single figure on the stage, I realized that I was part of something larger than myself; a great family of beings trying to live a spiritual life, stumbling and making mistakes, but always illuminated by the light of hope.

The “Marme Mönlam” (translated as “Lamp Aspiration”) has been the final prayer in the Kagyu Mönlam cycle for more than a decade. And each time it is sung, His Holiness Karmapa asks participants to be led in the prayer by monastics and lamas standing before the gathering.

This is not done as a way of merely “putting on a show” – although with modern lighting and stage technology, it can certainly look like that – it’s as thought His Holiness is asking the monastics and lamas to take their role as leaders and guides for beings, aiming them toward not just their own spiritual evolution, but the evolution of a loving societal conscience.

The Buddha himself gave teachings with a touch of drama – his miracles (fountains in the air, drops of light and so forth) before the crowd at the debates with non-Buddhist masters held during his lifetime were one such example – and the 7th Karmapa Chödrak Gyatso was known to put on “great spectacles” to bring the attention of many to the teachings and their blessing effect on our lives.

The Buddhist path can sometimes feel like a solitary one; trying to follow the Buddha’s directive to “do no harm, practice virtue, and tame the mind” can seem like an endless inner struggle removed from the struggles of others.

But it is our teachers who remind us that even though we cultivate virtue alone – by wishing for the benefit of others, restraining our wish to harm them, and looking within ourselves to perceive and nurture our own awakened nature – we are part of something larger than ourselves, a world where everyone is struggling, everyone is hurting, and everyone needs our help and support to go forward in their lives.

Through their teachings, public, private, and in our own minds (how many of us have recalled our teachers words in our minds before acting badly, and then restrained ourselves?) our teachers take the role of the Buddha in offering caring support for us and a reminder that we are not alone in our striving.

Through this, we have the potential for an opening, a softening of our hardened hearts, and an encouragement for the future.

All through the week of the recent North American Kagyu Mönlam, His Holiness was teaching us, telling us to let go of selfish clinging and remember than harming others harms ourselves, and that while there is breath there is hope for change and a more conscious life.

During the Mönlam, in the late mornings and early afternoons His Holiness would disappear for a while, working on the staging and performances for the Marme Mönlam, knowing that a crowd of people would be able to see the Buddha’s message more readily when the example was put before them in a pool of golden light.

And, during his concluding act leading the crowd in the lamp offering prayer, although he stood in the center of the stage, rather than being the object of all of this attention, His Holiness was more of a focusing lens, asking us to aim ourselves outward and reach for something larger: love for our fellow human beings.

“May my parents in the fore, may every sentient being …

“In this lifetime and all the places they take birth …

“See the pure realms of the perfect buddhas directly …

“And then become inseparable from Amitabha [the enlightened mind]…”

May we be uplifted in our hearts, see our Buddha nature, and, more importantly, the pain and suffering of others, so that the wish to relieve their suffering arises in our mind.

Mark your calendars for Columbus KTC at Comfest 2018!Lama Kathy’s Dharma Blog: We Are Not Alone
Scroll to top