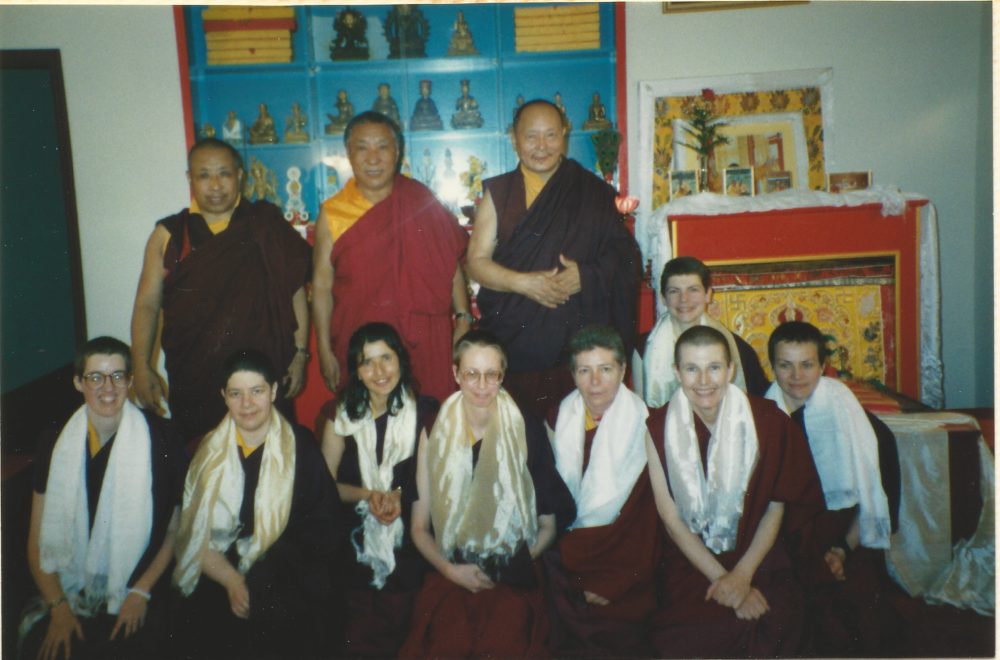 The ever-warming Spring has brought us blue skies, fluffy white clouds and a growing sense of hope that something new is coming – and not just the dandelion weeds from under the ground.

Twenty years ago this week, the doors of the Three-Year Retreat Center at Karme Ling opened and a group of us – weak-kneed, hesitant, weary but happy – came stumbling out of our three years of isolation and into a new world.

Things seemed to move faster – highway speeds increased, folks seemed to be talking much more quickly, and my husband Mike spent the trip home telling me about this curious thing called the Internet – it was all a bit much to take in. 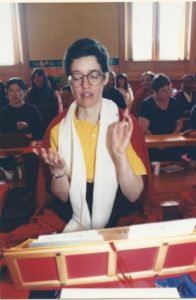 Lama Kathy at the “graduation” ceremony on May 25, 1996. Behind me to my right (viewer’s left) is Peigwang, who became Lama Lodro Lhamo; on my left, (viewer’s right) Cathy Lhamo Jackson.

The “graduation” ceremony had been so moving – we’d spent hours chanting the Gyalwa Gyamtso Red Chenrezig puja at our home monastery, Karma Triyana Dharmachakra – and it felt wonderful to be in the presence of my husband and all of my dharma friends.

Khenpo Karthar Rinpoche, our retreat master, had spent the previous three years pouring his heart and wisdom and knowledge into us – as much as our samsarically affected minds could absorb – and he made it clear to us that now was the time for us to “give back” in gratitude for what we had received.

“Traditionally in Tibet when someone finishes the Three-Year Retreat they are given the title of ‘lama,’” he said. “Now, what does this mean? This means from now until you die, you have one function, and one function only: to connect everyone you meet with the Dharma.”

After giving us this weighty charge, Rinpoche softened and encouraged us. “But be natural,” he advised. Don’t put on airs or act special. Just be yourself, and share what you know to the best of your ability. And if someone asks you a question you cannot answer, there’s no shame in saying, “I don’t know.”

All of these thoughts were tumbling round in my head on the drive home to Ohio from Karme Ling. I was thrilled at the possibility of being at last able to help others. But I also wondered – was I up to the task?

But in the end, I decided all would be well – not because of me, or anything I knew, but because of Khenpo Rinpoche.

I’d known Rinpoche since September 1977, when we met as part of an interview I planned to write for my local newspaper about this unusual person – a Tibetan Buddhist lama – who was visiting my small town to give a talk.

In the interview, I’d pressed Rinpoche, who spoke softly through a translator, about what I’d heard about Buddhist women in Southeast Asia, who were not given the same opportunities as men.

“The Buddha taught the equality of men and women,” he’d responded. “Anything you see that is other than that is the result of culture – not religion.”

I’d been impressed not just by this answer, but by his entire demeanor. He was both gentle and strong – a kindness with a core of confidence in something greater than himself. I knew instantly that I wanted to learn whatever he knew, and practice as much as I could of what he taught.

My years of studying with him were mostly attending his teachings and watching his demeanor with me and others – he was always patient, always compassionate, always understanding of the differences of others. The way he held a teacup – mindfully, each movement gentle and graceful – spoke volumes about the value of a stable and contemplative mind.

And now, even with an uncertain future in front of me – this “lama thing,” as my husband called it – I knew I could count on him to guide me through. No matter what, Rinpoche would be there for me, protecting me, guiding me. Answering questions I couldn’t answer; giving advice on how to teach, how to talk, how to be; I knew he would provide for me everything I needed, and that if I could just follow whatever he said, all would be well.

As my husband turned down our street, I instantly noticed something was different. It was an average Memorial Day, with people outdoors enjoying the sunshine and their yards – but every one of their front porch-lights was on.

“They’re doing it for you,” my husband said gently. “One of the neighbors sent around a message the other day. They wanted everyone to put on their lights, because they wanted to welcome you home.”

In the 20 years since that day, I still remember the tears that came to my eyes. That somebody cared about me, that someone saw me and knew me and wanted to demonstrate to me that most human of values – generous caring.

It was something I would see time and again over the years – when I came to Columbus KTC to teach, the dharma friends there welcomed me and cared for me and were patient with me and helped me become a teacher. Their honest questions and their unwavering support made it possible for me to stumble along and learn how to be that lama that Khenpo Rinpoche spoke of – the one whose sole function was to connect everyone she met with the dharma.

In the end, it all came down to those lights. Those porch lights, those people, those KTC sangha members, my husband, my family, my friends, and my guru.  They loved me; they reassured me. They guided me. They lifted me up.

No matter what – whether I succeeded or failed or something in-between – I would never be alone. Like Khenpo Rinpoche, they would be my lights along the way.

THE JOURNEY HOME: This Week’s Highlights

Work on the new home for Columbus KTC brought our KTC leadership into dialogue with Khenpo Karthar Rinpoche this week.

Rinpoche had been told that there were several options in front of our sangha – to build, or to buy and remodel a building – and the Board had asked for any preferences Rinpoche himself might have.

Rinpoche made it clear that his top priority was maintaining harmony in the sangha.

“This is a very critical, difficult time for KTC members, directors, and board. Rinpoche would like to say thank you for standing there [to support the KTC] and doing your best. He would like to express his gratitude to everybody.

“Rinpoche emphasized maintaining a harmonious connection/relationship with each other. This is the key for accomplishing [a new center] without obstacle, whether you build, or buy, or whatever.  Rinpoche knows you are already doing this [maintaining harmony]; please continue to do so.”

Khenpo Rinpoche also said that although it might be difficult to get a new place, the group should shoulder the difficulty together.

“We never want to kind of have an easy way out. Sometimes when we are desperate, we may want to do something quickly. But we have to think about the long-term benefit.”

Lama Karma said Rinpoche had suggested rebuilding on the Grubb Street property “because you already have the land, the property. If you have to purchase another land, it can be costly. [Rinpoche] was encouraging rebuilding there because it seemed like a public place, a decent place, where you can have people and parking.”

However, Rinpoche also said, “Your center is yours; it is for you,” and said that if everyone agrees that buying and remodeling an existing building is better, that would be fine, as well.

“Find something stable that will last a long time. If everyone agrees it’s something that everybody likes, it’s okay.”

Rinpoche mentioned the difficulty that another center had in buying a building that required extensive renovations, and cautioned the Board to choose property carefully.

Finally, Rinpoche said that once the sangha has chosen its method of recreating the center (buying or building) that he and the leadership at KTD Monastery would both help us raise money to make our new home a reality. And he reiterated his promise to provide statues and thangka paintings for the center.

Rinpoche had more to say, but in the interest of time and space, we’ll stop here. However, we’re editing the “Khenpo Karthar Rinpoche’s Advice to Columbus KTC” document, and will post it on our KTC Columbus website later this week.

Meanwhile, it’s important to say a big THANK YOU to our amazing Board – Director Kim Miracle, Assistant Director Tanya Schroeder, Treasurer Steve Phallen, Secretary Justin Fitch, and At-Large Member Eric Weinberg – for writing to Rinpoche and being such marvelous leaders for us in our journey home!

Saka Dawa DuChen: Observance of the Buddha’s Birth, Enlightenment, and...