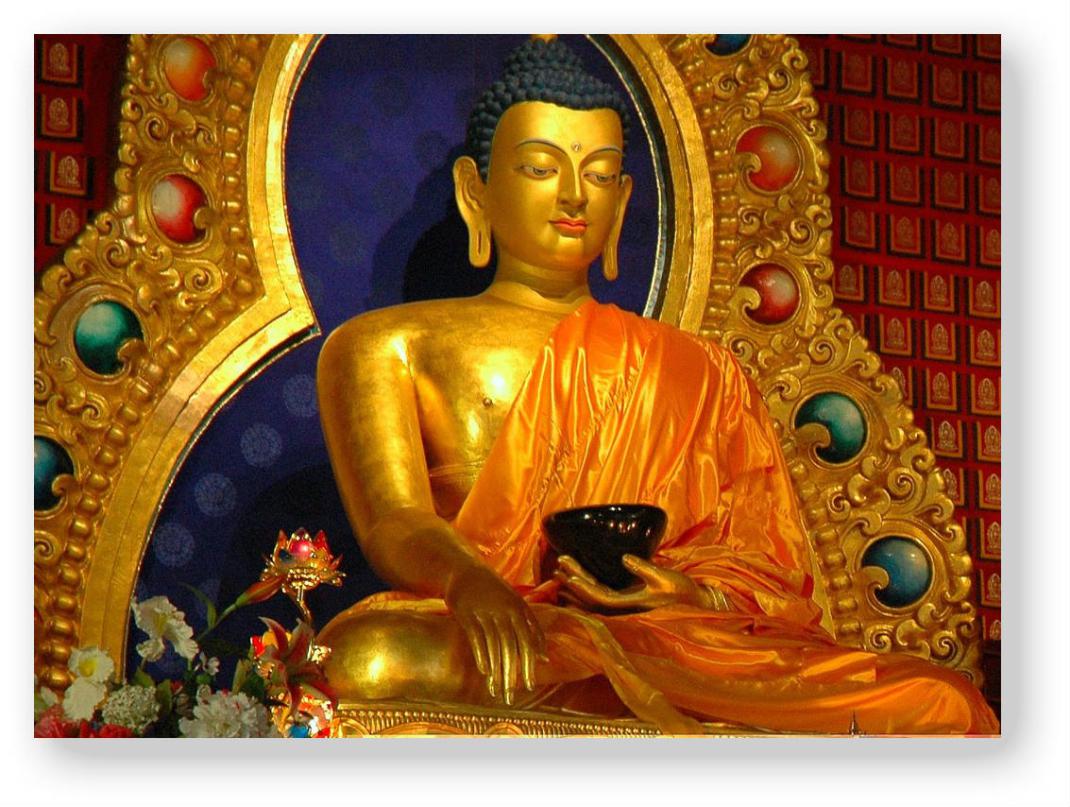 (Quoted from A Yearbook of Buddhist Wisdom by Norma Levine)

On the Full moon day of the Fourth Tibetan Lunar month, three great events in the life of the Buddha are observed.

The birth of Prince Siddhartha, who later became the Buddha, was wondrous. His mother, Queen Mahamaya, had a dream prior to the birth – a dream of a magnificent white elephant that descended from the heavens. Celestial music sounding praises filed the sky. The elephant held a brilliant pink lotus flower in its trunk, placed it within the queen’s body, and then entered inside her effortlessly. She awoke filled with sensations of pure bliss and joy. Ten months later, on the way to her parents’ home, she stopped to rest in the garden of Lumbini, and there, holding the branch of an ashok tree for support the queen gave birth to a radiant boy.

“When the Bodhisattva came forth from his mother’s womb, two jets of water appeared to pour from the sky, one cool and one warm for bathing the Bodhisattva and his mother. As soon as the Bodhisattva was born, he stood firmly with his feet on the ground, then he took seven steps to the north, and with a white sunshade held over him, he surveyed each quarter. He uttered the words,  “I am supreme in this world. This is the last birth.”

The enlightenment of Prince Siddhartha came “after years of practicing unimaginable austeries so that “all my limbs became like the knotted joints of withered creepers,” and “the skin of my belly and back met,” the monk Gautama — as Prince Siddhartha was then called — was near extinction but no closer to enlightenment. A young village girl, Sujata, with caring prepared a bowl of fresh milk with rice and graciously offered it to the emaciated ascetic. His senses immediately became alert.

Sitting under the massive branches of a bodhi tree, in what is now Bodh Gaya, Gautama began the world-shattering seven-day meditative insight that resulted in complete enlightenment. Here are the first words he spoke as the Buddha:

Seeking but not finding the house-builder,
I traveled through the round of countless births;
O painful is birth ever and again.
House-builder, you have now been seen;
You shall not build the house again.
Your rafters have been broken down;
Your ridge pole is demolished, too.
My mind has now attained the unformed nirvana
And reached the end of every kind of craving.

(quote from Bhikku Nanamoli, translator of The Life of the Buddha.)

There was a terrifying thunderstorm in the second watch of the night. When the third watch of the night had passed, the Buddha looked up and saw the morning star dazzling bright as a diamond in the dawn sky. To seal his enlightenment, he touched his hand to the ground and said, “The earth is my witness.”

The Buddha’s death is called Parinirvana – passing into nirvana – because there is no death for the enlightened. The container dissolves and the great expanse of space merges with itself. Parinirvana is the third observance of this special day.

“Knowing the body is like foam, realizing its mirage-like nature, cutting off the flower-tipped sensual realm, one goes unseen by the King of Death.”

On the full moon day nearly fifty years after his enlightenment, the Buddha and his disciples walked to the little mud-walled town of Kushinigar near the modern-day Nepalese boarder. He placed himself on his side, facing north, with one foot overlapping the other, mindful and fully aware. Twin sal trees shed blossoms out of season to cover him, sandalwood powder fell from the sky, and celestial music resounded. His beloved attendant Ananda wept. “I declare this to you,” the Buddha said. “It is in the natural of all formations to dissolve. Attain perfection through diligence.”

Ashvaghosha writes that the last words of the Buddha’s were these:

” Everything comes to an end, though it may last for an eon … I have done what I could do both for myself and for others … I have disciplined in heaven and on earth, all those whom I could discipline … Hereafter … my dharma … shall abide for generations … among living beings. Therefore, recognize the true nature of the living world and do not be anxious; for separation cannot possibly be avoided … When the light of wisdom has dispelled the darkness of ignorance, when all existence has been seen as without substance, peace ensues [at life’s end]. which seems to cure a long sickness at last … the time for my entry into nirvana has arrived. These are my last words.”

Here is a simple Meditation on the Buddha Shakyamuni, that Khenpo Karthar Rinpoche taught us years ago. You can do this meditation on Saka Dawa, or anytime you need the blessing of the Buddha to manifest in your life.

A Short Meditation on Shakyamuni Buddha

(By Khenpo Karthar Rinpoche; edited by Lama Kathy Wesley. From an oral teaching at Columbus KTC in 1978.)

Place your hands together at your heart, and pray to the Buddha, asking him to remove your obstacles and obscurations, and grant you wisdom and compassion. You may use your own words.

Then, imagine that golden light streams out from the Buddha’s form and touches you, cleansing you of all obstacles and obscurations: illnesses, mental afflictions, problems, difficulties, habits, etc. Next, imagine that the golden light gives you everything you need: healing, inner stability, wisdom, compassion, and so forth.

Finally, think that the Buddha dissolves into light, and merges with you, blessing your stream of being. Rest for a moment in the confidence that your mind and the Buddha’s mind have merged inseparably, and that you have received the Buddha’s blessing.

Dedicate the merit of your practice to yourself and all sentient beings.

This practice is good to do when you are not feeling well, or when you feel depressed or uncertain. It’s also good to do daily before you do your regular meditation or prayer practices.