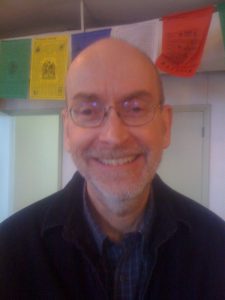 For many Columbus KTC visitors over the last two decades, Darrell Peters was their first meditation instructor. With kindness and patience, he helped orient new visitors and give an excellent introduction to the practice of meditation. He also served as a mentor for new meditators, helping them establish a daily practice.

Many folks may not know that Darrell has been a part of KTC since 1985. He took Refuge at KTC and has been the KTC’s administrative director as well as a Meditation Instructor and Mentor.

Beyond these roles, Darrell also has been a teacher of meditation instructors, both at KTC Columbus and for a larger audience at our “home” monastery at Karma Triyana Dharmachakra in Woodstock, NY, where he was part of the Training Program for Meditation Instructors workshop and retreat several years ago.

For more than a decade, Darrell also was Practice and Study Coordinator at KTC, assisting Lama Kathy and Lama Tom in organizing KTC’s many activities for practice and study of the Buddha’s teaching. He is widely praised for his gentle demeanor and patience in explaining new concepts to students of all levels.

Early this year, Darrell announced his retirement from his many KTC responsibilities. On Losar Sunday, Feb. 18, Darrell was honored by Lama Kathy and the entire KTC Board and Sangha with a beautiful small golden statue of the bodhisattva White Tara and a warm round of applause.

Explaining his decision to retire, Darrell explained that after a brief but intense illness 11 years ago, he recovered most of his health, but has been troubled with dizziness and fatigue, conditions that have continued until the present day. These conditions have made it difficult for him to keep up with the demands of his volunteer work.

During his short talk at the Losar Sunday event, Darrell said he loves KTC and will continue to be involved with the sangha, and is very grateful to have had the opportunity to serve the sangha for so many years.

We all join together to offer our thanks to Darrell for all he has given, and wish him blessings in his retirement. May all beings benefit!